My first electric guitar, an Epiphone Les Paul 100, hanged on a wall for 15 years. It had become unplayable with a horrible intonation (somebody told me at the time the neck was warped, I tend to think now it was mainly because the frets wore out). It wasn’t a great axe at all but it was the cheapest one I found at the time (in 1997) that looked like Slash’s Les Paul !

I recently decided to restore it and to put a whole bunch of features I always dreamed to have on a single guitar. To sum it up :

I break the suspense right away with the before/after photo (how original) : 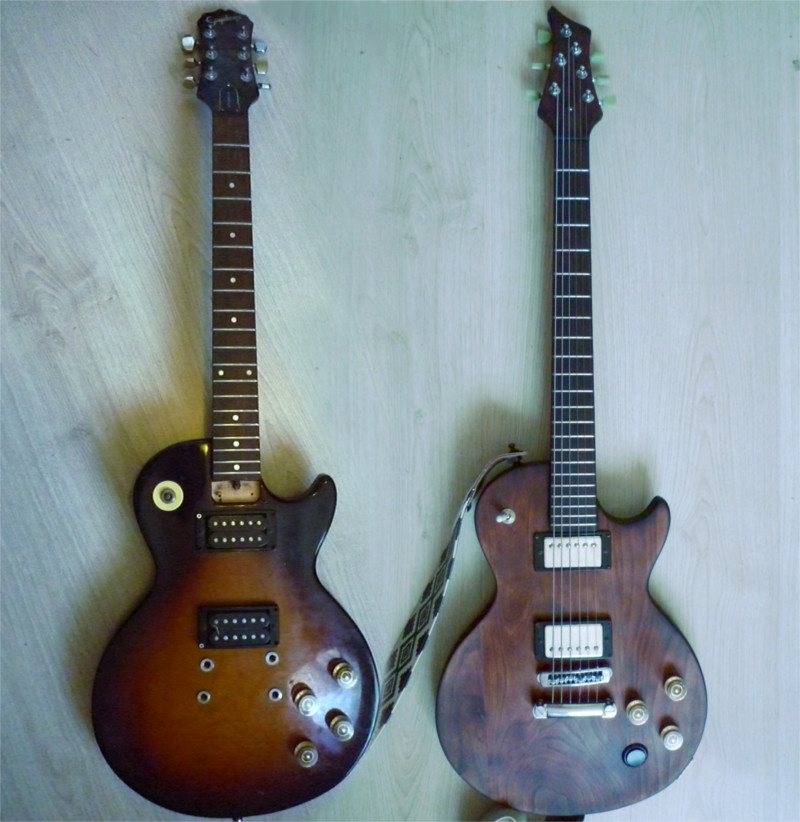 The guitar was in a horrible condition : varnish full of scratches and chips, half of the pieces were missing cause I put them in other guitars, stickers residue, fingerprints, some scotch instead of solder (hem… the great era before I had a soldering iron !) , etc. I also cut the end of the neck/fingerboard to have one more fret on my dobro.

To top it off, I tried to burn it (yes I have a problem in my head) for the needs of this videoclip.

So I had some work… Here are some other pictures of the remains : 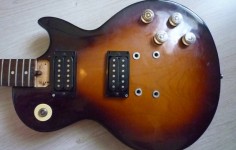 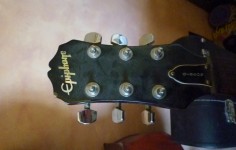 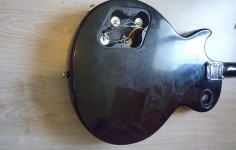 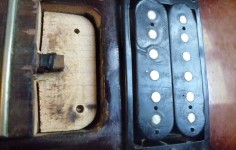 After removing the neck and all the electronics from the body, I started sanding.

I did most of the sanding by hand because my sanding machine wasn’t holding the paper very well anymore. However on some places like the cutaway, there’s no choice, unless you have a specific machine. I used 80 grit sandpaper first, then 220, 400 and finished with a 500 grit. I spent several whole evenings for this job.

It was long and hard but the end result is there (I just received the new neck too) : 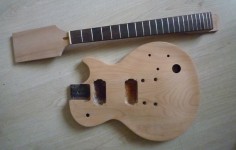 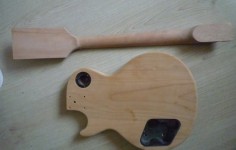 The initial finish covered completely the wood grain on the edges, here the 3 mahogany pieces of the body are pretty distinct. And still no traces of the maple top unlike Epiphone’s nowadays models, I really had a crappy model 😉

At this stage I already enlarged the hole for the killswitch (a Sanwa arcade button) but had’nt sanded the small part where the neck lies yet.
I also filled the two little holes for the screws of the initial pickgard with a mixture of wood dust from the sanding and wood glue.